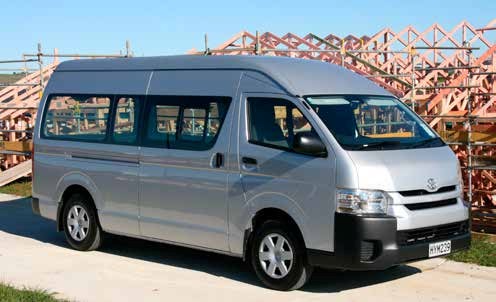 Safety seems to be the trump card that most van manufacturers wave when the subject of Toyota’s HiAce comes up against their own offerings, which have a veritable alphabet soup of safety kit.

There was, therefore, much glee on the part of Toyota’s competition as July 1 loomed and, with it, the mandatory introduction of electronic stability programs (which most mainstream van manufacturers already offer) for all new vans imported into New Zealand.

Would Toyota roll over, cry “uncle” and withdraw the evergreen HiAce? After all, Toyota was a little slow to introduce other safety features such as ABS brakes and dual airbags. Would ESP be the END?

As a control system, VSC is remarkably unobtrusive in as much as it doesn’t grab the vehicle by the short and curlies when traction is lost — after all, that’s what ESC systems are designed to do — but gently allows wheel spin to be slowed to such a point that the wheels can regain some grip and allow the driver to remain in control.

Building Today found a gnarly bit of off-camber tarmac, liberally covered in gravel, and gave a fully-laden, high-top 3-litre, turbo diesel HiAce ZX far more welly than was needed, almost demanding the system not live up to its promise of sustainable traction.

HiAce’s 3-litre turbo diesel can spit out an appreciable 300Nm of torque and 100 kilowatts of power, which should cause even the mighty Bridgestone factory-fit tyres to have a little bit of a hissy fit on unfriendly surfaces.

However, VSC proved too smart and, other than a little dashboard light appearing, the results were terribly unexciting.

No blitzed gravel, no slides, no loss of control at all — Jeremy Clarkson might have punched someone out of sheer boredom!

As a safety system, VSC works as advertised — indeed, if not better. What, then, of the rest?

HiAce has traditionally suffered a little in ergonomics and front cabin space, but this has been dealt with effectively by losing the third (centre) seat, which few would be happy to use anyway. There’s now a sensible-sized work area in place, with lots more room for the driver and offsider.

Cruise control works a treat, as does the reversing camera — complete with guidelines — in the rear view mirror. The now-standard Bluetooth-capable audio system with steering wheel controls is well and truly able to eclipse the roar of the engine when the HiAce is shuttling around town.

On longer trips, the engine burbles away, gently sipping between eight and nine litres per 100km according to the official figures. Sensible driving and use of cruise can get you down into the high seven litres per 100km mark.

The tested van swallowed a truckload of stuff and offered easy loading and unloading through dual-side sliding doors and a massive rear tailgate, while the vinyl floor covering and timber side protection systems stopped any nasty interior paint scratches.

It rather looks then, that Toyota’s extensive HiAce range (starting from $46,830 for the ZL models and from $56,330 for the diesel-only ZXs) will continue to be a (safe) thorn in the side of its competition for many years to come.