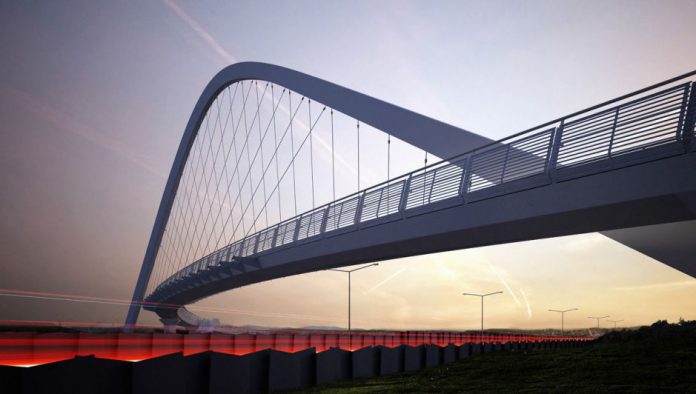 The arch section of the highly anticipated Hendon Footbridge has been lifted into place in Owairaka, Auckland.

The new bridge, commissioned by the New Zealand Transport Agency (NZTA), constructed by the Well Connected Alliance and designed by Warren and Mahoney, will span the new Waterview Connection motorway.

The arch now acts as a sculpted emblem for the upcoming Waterview tunnel’s southern entrance.

The 300-metre bridge has an exceptionally modest, elegant trajectory, with the deck gently curling three-dimensionally through the sky. The arch overhead acts as a curving system of support to the tangentially connected sections of the bridge.

The arch crosses the highway while the deck snakes alongside. This produces an intricate cable configuration that straddles the deck as it glides over the highway in a perpendicular entanglement, forming a hyperbolic paraboloid.

The deck, generated from three connected arcs, gradually decreases in diameter as you advance to the southern edge. The arch is projected to form a conceptual surface that is inscribed with a 7% ramp slope.

This simple sculptural sight is treated as pure as a blank canvas. The concrete deck and steel arch have an arctic white stain and paint respectively. This is in stark contrast to the silver support-cables, left with their metallic tones to highlight the functionality while also making them distinguishable against the other elements.

Due to constraints from both the north, at Hendon Park, and the Oakley Creek on the highway’s southern edge, the alignment of the bridge was a tight challenge. Earlier attempts to lift the arch had to be postponed because of strong winds before it was finally lifted safely into place.

The Hendon Footbridge, due for completion in 2016, will be Warren and Mahoney’s third bridge in the Auckland region alone.

The NZTA plans to open the bridge, and the Waterview tunnels connecting State Highways 16 and 20, in early 2017.