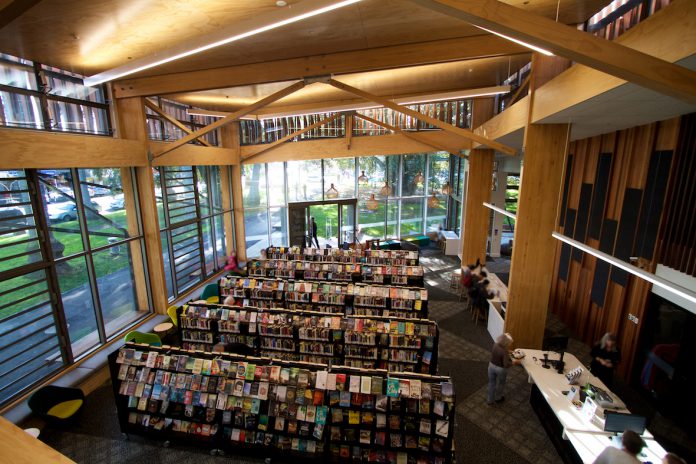 Blending perfectly into its park-like surroundings, the Devonport Library is attracting more visitors and a positive response from around the globe.

When a replacement for the existing dated, dark and leaking Devonport Library on Auckland’s North Shore was first proposed, it divided the community. Many opposed the new building and questioned the need for it.

But the Devonport Library, winner of the James Hardie Commercial and Civic category, and the value award between $5 and $15 million, at this year’s New Zealand Commercial Project Awards, has been popular with the community since it was first opened in February 2015.

Visitor numbers have increased, critics have been enthusiastic, and in July 2015, it was one of only five libraries globally shortlisted for the Public Library of the Year Award.

According to the judging panel, it would be easy to miss the new library if you are heading towards the ferry because, although it is a substantial building, “it sits quietly amongst the trees, a peaceful haven” in the park.

The $7.8 million library building, designed by Athfield Architects and built by Naylor Love Construction, has 950sq m of floor space (including a mezzanine floor area), but sits within the same footprint as the former library on Windsor Reserve.

Complete with a secret door between the children’s area and the community meeting room and anti-fight pillow seating squabs, the library has been fitted with a microchip-activated cat door for the elderly resident cat, Benjamin.

Other innovative design features include the natural ventilation system which keeps the air at an ambient temperature using louvred windows and the building’s natural air flows, and a series of “snug” areas and subtle acoustic panelling that allow the library to be used for different purposes at the same time.

A floor-to-ceiling glass wall with the louvred windows on the north, and a curved prow towards the sea, are all clad externally in cedar and internally in pine plywood.

A veranda wraps around the front entranceway, and the windows frame the harbour views on the south and east sides of the building.

Inside, the library is given warmth by using natural materials, with a welcoming, domestic atmosphere.

A pine plywood-clad internal staircase is itself a book shelf, new meeting/study rooms have been developed, the former Devonport Borough mayoral chair is incorporated into living room-style seating, and wide gas fireplaces have been built upstairs and down.

Judges acknowledged the project team’s challenges of working on an historic site and under community scrutiny.

“Replacing the public library amongst protected trees, on an historic site in the centre of Devonport was always going to be fraught,” judges said.

“However, the result is wonderful — a delightful timber building with intimate views of the park and glimpses of the harbour beyond, happily housing an eclectic mix of local artefacts, and providing a gathering place for disparate community groups.”

Winners will be announced at a national gala event on May 12, 2017, in Auckland.