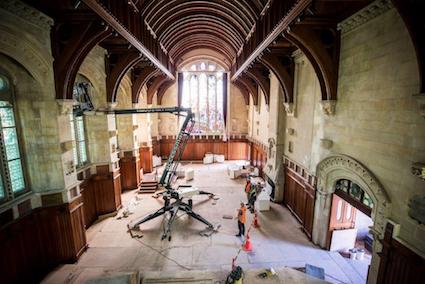 The immaculate heritage restoration of two Arts Centre buildings in Christchurch has received an Award of Merit in the prestigious UNESCO Asia-Pacific Awards for Cultural Heritage Conservation.

It’s the fourth time a New Zealand project has been recognised by the awards, with the Arts Centre taking out honours in a field of 43 projects from 10 countries.

It received the award for the post-earthquake restoration of two of the site’s most historically valuable buildings — the Great Hall and Clock Tower.

Judged by an international panel of conservation experts, 16 awards were presented to diverse projects from six countries — the others being from Australia, China, India, Iran and Singapore.

Duong Bich Hanh, Chair of the Jury and Chief of UNESCO Bangkok’s Culture Unit, says the resurrection of the Great Hall and Clock Tower has returned a major historic landmark back to the public, which now continues to serve as a social, educational and cultural hub in the community.

“The restoration celebrates a memorable step towards the city’s recovery following the devastating earthquakes of 2010 and 2011.

“Suffering major damage, the Gothic Revival masonry structures underwent a sophisticated regime of seismic strengthening and retrofitting, along with painstaking reconstruction of significant heritage features such as the turret and stained glass windows.

“Modern facilities and services were discreetly inserted to enhance the contemporary functionality of the buildings.”

The UNESCO Asia‐Pacific Awards for Cultural Heritage Conservation programme recognise the efforts of private individuals and organisations that have successfully restored and conserved structures and buildings of heritage value.

Awarded projects reflect a clear understanding and application of various criteria, such as the articulation of the spirit of place, technical achievement and appropriate use or adaption.

The jury also judges the project’s contribution to the surrounding environment and to the local community’s cultural and historical continuity.

“The jury was impressed by the heroic nature of the conservation projects, especially those that underscore the importance of protecting heritage that is rooted in the least powerful segments of society,” Duong says.

“It is fantastic recognition for the entire team that has worked so hard and with such passion.”

The UNESCO Award is the fifth post-earthquake award won by the Arts Centre for the restoration of its buildings.