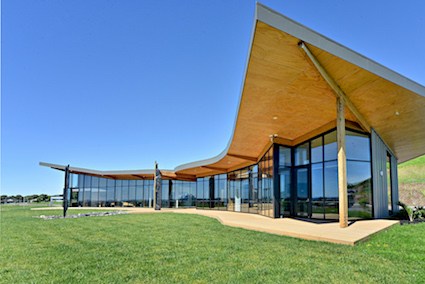 Inspired by local legend, the new administration building for Mangatawa Papamoa Blocks Incorporation took out the Value Award under $2 million and the prestigious Special Award at the 2017 New Zealand Commercial Project Awards.

The legend tells of a baby whale and its parents who become stranded in Tauranga harbour, and are turned to stone after drinking from a magic spring, and go on to form the local hills.

Dean Ewing of Form Building & Developments says winning the awards for the Mangatawa Tari project was a proud moment for the team.

“It was really exciting for everyone. It was a design and build project so there was a lot of collaboration throughout the process, and it was great for the entire team to get the recognition for that,” he says.

The Special Award is given at the discretion of the judges for a specific outstanding project or element of a project they feel is worthy of recognition.

Mr Ewing says the project’s unique story and execution of this made it stand out from the competition.

“The entire design evolved from the legend of Mangatawa. We met with a carver at the beginning of the project who created three carvings which were integrated within the design right from the get go,” he says.

These three carved Pou average more than five metres in height, and represent the three whales of The Legend of Mangatawa.

Mr Ewing explains that the shape and detail of the design made the build more challenging.

“The shape of the building was really unique, particularly with the roof in the shape of the whale’s tail. There was also a large amount of detail in the facade that required a high level of craftsmanship,” he says.

“However, the team worked really well together throughout the project, so the overall execution went really smoothly.”

The judges were impressed with the building’s striking design inspired through its strong cultural connection.

“This legend drove a design in the shape of a whale tail, with a tall sweeping wall of glass facing the spectacular view across the Bay of Plenty,” the judges said.

“The project took the legend to heart, never allowing practical considerations to water down the concept.

“The result is a striking building which is a great source of pride to the community it serves.”

Mr Ewing says winning the awards lifts the profile of the company on a national level.

“The awards give us great recognition amongst our peers and reflects the quality of the work we produce.”