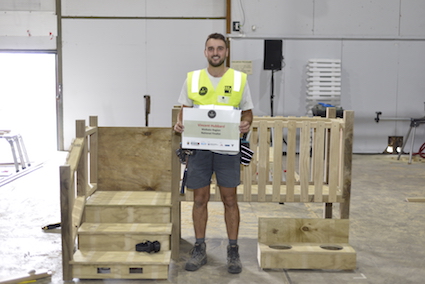 Vincent “Vinny” Hubbard’s ability to focus and handle the pressure saw him take out the Registered Master Builders CARTERS 2017 Apprentice of the Year recently.

The 24-year-old from Hamilton, employed by Urban Homes, says realising he had won the national competition was an amazing moment.

“It definitely was a surprise. I knew I was in with a shot based on the competition day’s events, but I had never really entertained the idea that I would actually win it,” he says.

“I had to take a minute to double check that it was actually my name and my picture on the screen when I won!”

Vinny says he entered the competition to challenge himself and see how his skills stacked up against other apprentices in the industry.

“I wanted the opportunity to get an idea of where I was at compared to my peers. Also, I knew that entering the competition would only make me a better apprentice by putting me to the test and making me work and study harder,” he says.

As part of the national competition, the 10 finalists were tasked with a six-hour practical challenge where they built “puppy palaces” to be donated to the SPCA.

“There was definitely a lot of pressure with TV cameras and judges watching your every move, and your family and employers on the sideline. The giant clock on the wall also added to the intensity!” Vinny says.

“It challenged me to stay in a good head space and really focus. It was such an awesome experience and very rewarding all round, especially getting to meet the other contestants and hearing about their experiences in the trades.”

Judges were impressed with Vinny’s all-round knowledge of the industry and excellence in all competencies.

“Vincent had a very solid submission and spoke well about his project in the interview. His passion for his project and the industry really shone through,” the judges said.

“He had a calm temperament throughout the entire competition and handled the pressure extremely well. This was evident in being the only apprentice to complete the puppy palace on time.

“His puppy palace was completed to a very high standard of craftsmanship — a worthy winner of the 2017 Apprentice of the Year.”

After realising that university wasn’t for him, Vinny decided to try his hand at an apprenticeship and hasn’t looked back.

“I gave it a go and I was really surprised to find it was the perfect fit for me,” he says.

“I really enjoy the work. It’s physically challenging, there is so much to learn and so many opportunities available for young people in the industry.”

As well as the title of Registered Master Builders CARTERS 2017 Apprentice of the Year, Vinny won the use of a brand new XLT Ford Ranger, provided by CARTERS, for one year, a $5000 CARTERS Business Tools Grant, a place on an Outward Bound course, and a range of products and tools.

Apprentices, employers and young people aspiring to be part of the construction industry are also encouraged to join the Registered Master Builders Facebook page at
www.facebook.com/registeredmasterbuilders.

The Registered Master Builders Apprentice of the Year competition is made possible thanks to principal sponsor CARTERS, the Building and Construction Industry Training Organisation (BCITO), and supporting sponsors the Ministry of Business, Innovation and Employment (MBIE), and APL through their Altherm, First and Vantage brands.