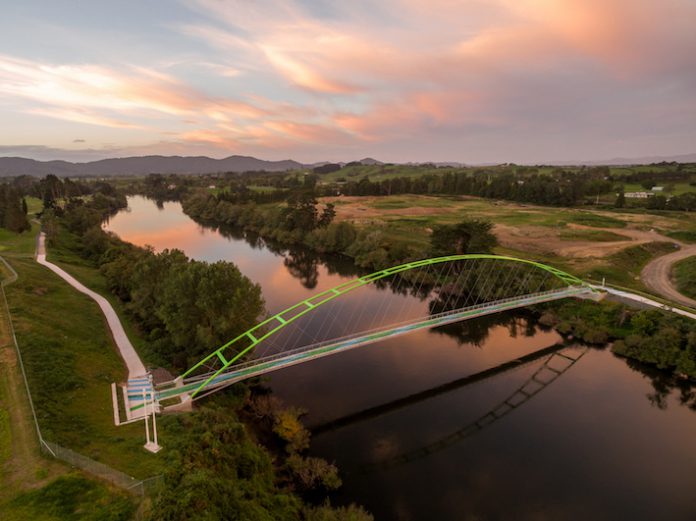 Airways’ Wellington air traffic control tower and Perry Bridge at Horotiu on Te Awa -The Great River Ride — are both shortlisted for the 2018 Institution of Structural Engineering Structural Awards.

The awards will be presented at a ceremony held in central London on November 16.

Past winners include the Sydney Opera House, the Pompidou Centre in Paris, and the Severn Bridge which runs between South East England and South West Wales.

“We are thrilled to be shortlisted. The work of our talented consultants and the impact their projects have had on New Zealand communities has been internationally recognised by some of the industry’s most revered experts and practitioners.

“We’ve always believed some of the best engineering in the world happens right here in New Zealand, and it’s great to see our projects on the biggest engineering stage.”

Positioned over the Waikato River, Perry Bridge is also the longest of only four network arch bridges in the country, and features mosaic artworks at each end of the bridge, designed by local schools based on either side.

Designed by Holmes and built by Emmetts Civil Construction, the bridge is shortlisted in the Pedestrian Bridges, Construction Innovation, and Outstanding Value categories.

Set to open late in August 2018, the control tower has fast gained recognition locally and beyond for its striking lean into the prevailing wind.

The tower is designed to withstand high winds and natural disasters, including earthquakes and tsunamis, and will form a key element of the region’s post-disaster infrastructure.

All projects entered into the awards are judged by a panel comprising international experts in engineering, design, architecture and construction.

Projects are measured against criteria including excellence in structural design, creativity and innovation, elegance and detailing, sustainability, and value.

The Institution of Structural Engineers Structural Awards have been held for more than 50 years.