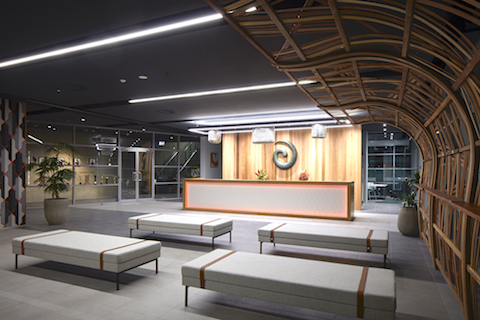 The project was also awarded the Value Award $2 million – $5 million.

RCG associate director Andy Florkowski says winning the national award was a great way to have his company and him recognised across the entire industry.

“The great thing about the Awards are the recognition they give the team, not just within architecture and property development, but in front of your peers and the wider industry,” he says.

Mr Florkowski believes the project stood out from the competition due to the team’s ability to overcome several difficulties that were unique to the Maori Television project.

“As well as being an office refurbishment and having 200 staff shifting across the city, we had to factor in stringent broadcasting requirements, and integrate acoustic and visual services within the design,” he says.

“On top of that we had to keep Maori Television live on air between the transition.”

Working with Maori Television meant there were several cultural factors that RCG had to consider throughout their design process.

“The space had to embody the DNA of Maori Television and that of a wider cultural identity of all New Zealanders.

“It also had to encompass the identity of many Iwis. This cultural integration added another layer of complexity,” he says.

“The client worked closely with the design and construction team to create new offices and studio spaces for Maori Television.

“The team’s focus on a collaborative and solutions-based approach set the foundation for the successful completion of the project.

“This is despite the challenges of the existing building, tight time frames, and the demands of highly technical specialist works required,” the judges said.

While RCG had entered projects in previous competitions, this was their first win on a national level.

“The award solidifies our credibility in delivering designs that are well thought out and cutting edge aesthetically,” Mr Florkowski says.

“The fact we also won the Value Award really shows we can execute beautiful spaces in a way that works with the client’s budget considerations in mind.”