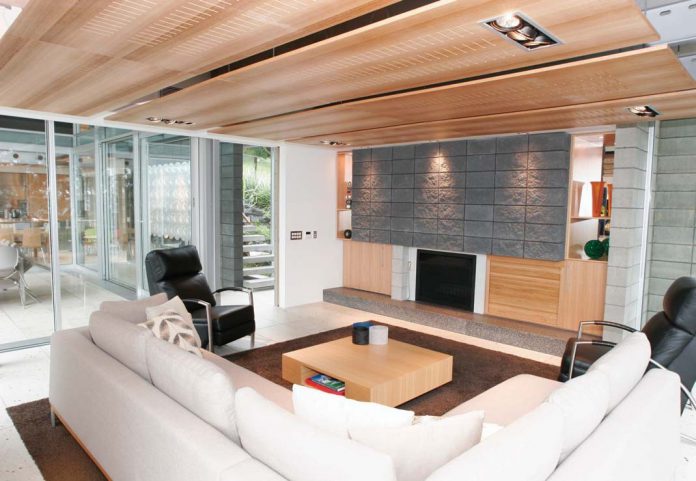 A movie called The Piano made many New Zealanders aware that the beaches on Auckland’s west coast were places of wild scenic grandeur. Of course, generations of surfers have known about the attractions of west coast beaches for years — none more so than Bruce Barton, builder of a home in Piha which recently won the Registered Master Builders 2005 PlaceMakers Supreme Award.

In deliberating who should receive the award the panel of judges called the construction of the winning home “faultless”. Not only was the site difficult, they noted, but they were unanimous that the builder had done a remarkable job. For almost two of his nine years as a Piha resident, Bruce has worked on the award-winning home which the judges noted “was an extremely challenging design for the builder to execute”. Bruce says construction of the home required a sophisticated approach.

“We had to use a wide range of different products to achieve what the architect wanted,” he explains. “I must admit I’m personally very proud of the company’s role in creating this home and I’m proud, too, for all the people who’ve worked on the house that it has won the Supreme Award.” As far as Barton Builders is concerned, Bruce agrees that the challenge began before the house itself was started. “We needed to construct a three metre-high gravity retaining wall built of rock,” he recalls.

“Sometimes there were 10 people working just on that wall. I calculated that, in the end, we used 49 subcontractors to complete the whole job.” The feature that really distinguishes the awardwinning home is the exterior which is layered with floating glass and concrete.

“This is an example of the challenges we faced in executing the design,” Bruce says, “but it’s what made it such a satisfying job to work on too.” The home, on three levels, incorporates a garage, a wine cellar and workshop on the basement level.

Internal access leads to the ground floor main living area, constructed around a central, protected courtyard. In this area, particularly, the architect specified the use of natural, elegant materials. “They help to create a feeling of natural space,” Bruce says.

“For me, it was a pleasure to incorporate such high quality finishes into every aspect of the internal design.” That internal design incorporates a spine made from black, honed block. A glass bridge runs parallel to this spine, leading to the owners floor which includes a master bedroom with ensuite bathroom.

Guests climb a floating staircase from the ground floor living area to the first floor where there are two bedrooms, a bathroom complex and a study area. Like the rest of the home, these are extremely spacious. The fact that the house has been judged “faultless” is a tribute to Bruce’s work philosophy.

“I don’t like time constraints,” he says emphatically. “When you have to hurry a job, quality goes out the window.” Bruce adds that he spends time checking the quality of each man’s work. “It has to be true, because that’s how you maintain quality,” he insists.

“While I believe that’s important on every job, it’s doubly important on a project where high quality is a specified component.” He adds that Barton Builders’ reputation has also been built on the relationships he establishes with clients and architects.

“It’s essential to maintain good communication with them,” Bruce says. “Actually, now I think about it, it’s important to communicate well with everybody who’s involved with the job.” Bruce has been surfing at Piha since 1969, almost as long as he’s been in the building trade.

“I left school 40 years ago,” he laughs, “and worked for several builders around Auckland until I set myself up as a sole trader in 1978.” In 1995 he established Barton Builders Ltd, gaining a name as a specialist in the construction of architectdesigned homes in the Titirangi area where he and his family lived.

Titirangi is the line of hills separating Auckland from the west coast — not far for Bruce to travel to his beloved Piha beach. Not close enough though, because Bruce and his family moved to Piha itself in 1996. “This proved to be a good move because I was, and still am, the only Registered Master Builder living in Piha,” Bruce says.

“My first big job out here was a house designed by well known Auckland architect Simon Carnachan, who wanted quality workmanship for his clients. So most of my work has been in Piha since then.” Barton Builders is a family company. Bruce’s youngest son Bryce, a qualified carpenter, is his “right hand man,” he declares.

“He knows about the value of allowing adequate time if you want to produce a quality job.” Bruce says the other important person in the company is his wife Dianne, who runs the office and pays everyone — “including the IRD,” Bruce grins. “She does quoting for minor jobs too, which suits me because I don’t even see some of them.”