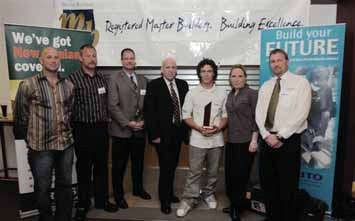 Andrew Meiklejohn says entering and winning the Registered Master Builders Carters 2006 Apprentice of the Year competition was one of the most fulfilling things he has ever done.  Mr Meiklejohn, who was named the Southern Region’s Apprentice of the Year last year, says he never thought he would win the regional title, but doing so spurred him on to keep setting personal goals and challenging himself.

“It was great to have my skills and knowledge of the trade recognised by the industry and by other apprentices. The competition really made me challenge myself to see if I had what it took to be the best at what I do,” he says.

“I never thought I would win, and doing so made me realise what I am capable of,” he says. The 21-year-old attributes much of his success to employers Stewart Construction Ltd, who provided great support and advice throughout the competition.

Peter Ross of Stewart Construction Ltd says Mr Meiklejohn’s commitment and natural abilities make him a great asset to the company and a role model for other apprentices. “We’re proud that Andrew put himself out there and entered the competition. It was important for us to support him throughout and encourage him to excel in what he was doing,” Mr Ross says.

“In a business sense it has also been great for us. Other people in the industry recognise that we have quality people working for us and that we are committed to the future of the industry.”

The $2000 study grant Mr Meiklejohn won as part of his Apprentice of the Year prize package has seen him enrol in Otago Polytechnic, where he is studying the National Certiificate in Construction Leading Hand and Supervision, part-time. Skills translate to life in general “The course has been valuable so far and has taught me a range of skills that are important on the building site, but that also translate to life in general,” he says.

Due to complete his apprenticeship through the BCITO this year, Mr Meiklejohn is excited about taking the next step in his career and furthering his experience and technical skills with his current employer.

Entries in the Registered Master Builders Carters 2007 Apprentice of the Year competition are open until Tuesday, July 31. The competition is supported by principal sponsor Carters, and supporting sponsors the Building and Construction Industry Training Organisation (BCITO), Registered Master Builders Federation and the Department of Building and Housing.

Entry forms can be downloaded from www.masterbuilder.org.nz or www.bcito.org.nz, or are available at Carters stores nationwide.