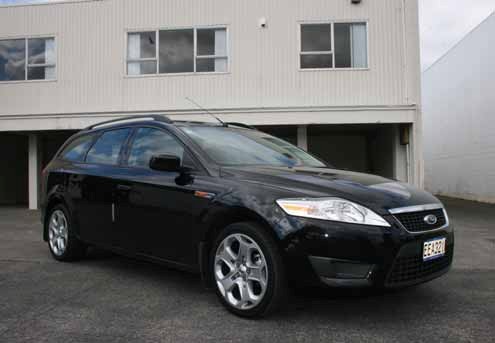 Following the recent launch of the all-new Ford Mondeo, Ford New Zealand has announced an enhancement to the line up already.

The second quarter of 2008 will see a new Mondeo arrive in the form of the XR5, a 2.5-litre, 5-cylinder turbo-charged hatch with a six-speed manual transmission and, supplementing that, a 2-litre turbo-charged diesel engine, mated to a six-speed automatic, for the sedan, hatch and wagon versions.

The new Mondeo features an impressive no-compromise array of active and passive safety technologies, including Dynamic Stability Control (DCS) and new driver’s knee airbag as standard across the range.

Typically with modern vehicles, there is little difference between the handling of an unladen wagon and a conventional sedan — car manufacturers go to great lengths to ensure this. However, the Mondeo does exhibit different characteristics, and it does depend on what your personal preference is.

My opinion is that the wagon, in the 2-litre manual form, is actually the best package for the wagon. On the other hand, the sedan is better off with the larger engine and the 6-speed auto.

For the tradie though, the sedan is probably not as viable a proposition as the wagon. Further to that, it should come as some relief that of the wagons, Ford has made the entry level version the more tractable of the two.

This doesn’t mean you can’t have fun with the 2-litre wagon. Its engine sparkles, the transmission is very smooth and positive while the handling is — in a word — remarkable.

The whole attitude of the Mondeo wagon is one of neutrality. When pushed hard into a corner there is the slightest hint of understeer.

We can only assume that this has been built in to contend with a fully laden vehicle, and the understeer characteristic might inspire caution in the exuberant driver.

The Mondeo wagon also offers power to burn, despite its comparatively small engine encased in a very large body. The engine enjoys revving and 100km/h cruising is usually just under 3000rpm.

There is plenty of space inside the Mondeo which is, incidentally, making its way into Australia for the first time in seven years.

At one point, the Australian market refused to take the Mondeo despite worldwide recognition of the car’s excellence.

A generation later the Ockers have changed their minds and Mondeo is destined to rock the land of big red rocks.

In the home of the big Aussie car, the arrival of the Mondeo may well ruffle a few feathers, as the new model appears to be far more spacious than its predecessor in just about every respect.

Physically in fact, the 2-litre Mondeo seems to have more in common with cars twice its engine size than it does with other 2-litre cars.

The Mondeo has always had trump cards in terms of safety and level of appointment, and the new model is no exception.

These features and a few others have earned the Mondeo a full five-star EuroNCAP safety rating.

All told, the Mondeo 2-litre wagon is an excellent all rounder — comfortable, modern, spacious and safe, so what’s stopping you calling your Ford dealer today and asking him/her to take you through the complete Mondeo wagon, priced from $37,490?