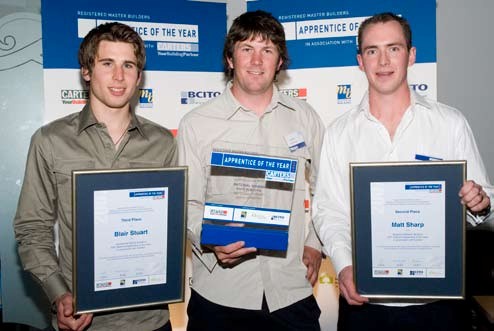 Taking out the Registered Master Builders Carters 2007 Apprentice of the Year was a career highlight for Taupo carpentry apprentice Rhys Forsyth, and nearly two years on Rhys is still aiming high.

Mr Forsyth was in the final year of his apprenticeship under Gary Rowe of National Park Construction in 2007, when he was named the Central North Island Apprentice of the Year, before going on to win the national title.

Today he has his own building company — Accessible Homes — which is fulfilling his dream to build just that. “My wife Deanna is a nurse, and we’re both really passionate about building homes suitable for the elderly and people with disabilities,” Mr Forsyth says. “It’s that passion that we have based our business on.”

According to Mr Forsyth, building accessible homes isn’t particularly difficult or expensive. “It doesn’t have to cost the client an arm and a leg if it’s kept in mind from the start of the project. It’s the little things, such as ensuring the hallways are a bit wider than normal, making sure there is at least one accessible bathroom and so on,” he says.

It’s when people decide to make an existing home accessible that things get expensive. The price of the alterations can be much higher.” Mr Forsyth has recently completed the house he was building for him and his wife, and is now working with his brother and another builder on a large house on Waiheke Island for his grandmother.

“It’s nice to get the opportunity to work with my family and for my family,” he says. As part of his national Apprentice of the Year prize package, he won a trip to a trade show of his choice to the value of $3000, which he used to attend the United States International Building Expo in Las Vegas in 2008.

“It was a great experience. I met a lot of builders and learnt about all the different projects they were working on — it was a good eye opener.” He was also awarded two study grants, which he plans to use next year for either a small business course or a design/draftsman’s course.

“It’s hard to think about growing my company with the market the way it is now, but the idea of being able to design and build homes is something I’m really interested in,” he says. The past year in business has been a good learning curve for Mr Forsyth, especially given the current economic climate.

“I think the good builders are doing fine. It’s the cowboys who are finding the work has really gone,” he says. “We’re just focusing on doing the best we can in the circumstances, and when things pick up we’ll think more about growing or diversifying the business. At the moment I’m happy living the dream — just being out there on site with the guys.”

Entries for the 2009 Apprentice of the Year are open until 31 July. For further information, or to download an entry form, go to www.masterbuilder.org.nz,www.bcito.org.nz, or www.carters.co.nz. Entry forms can also be collected from Carters stores nationwide.