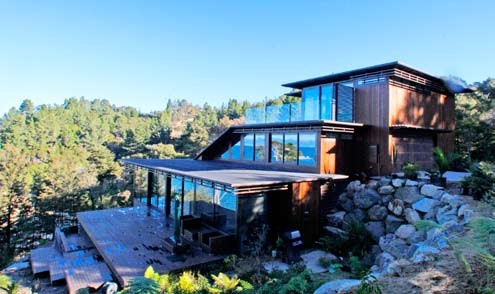 Building started out as a hobby for Paul Richards, owner of Ezebuild and Contemporary Homes, but it has since become his passion. His recent building accolade is testament to this. Mr Richards won the PlaceMakers Renovation over $500,000 category, and the PlaceMakers Bathroom Excellence Award in the

Registered Master Builders 2009 House of the Year, in association with PlaceMakers. However, Nelson-based Mr Richards readily admits building was not his first career choice. He started out with a New Zealand Certificate of Mechanical Engineering, but changed tack after purchasing his first house.

“I bought a house, decided that I could renovate it myself, and it all went from there,” Mr Richards says. “After about 15 years I set up my own project management business, Ezebuild, in 2007. I later started Contemporary Homes as a construction company.”

Mr Richards’ work on the winning property, the renovation of a 1950s house in Nelson, began when a client came through one of his show homes. “The clients liked what they saw and asked me to renovate their house.”

The house was propped up on a hill in Venture Cove in Nelson, and it was in dire need of attention. Mr Richards and his team were asked to take the 1950s house “that really had nothing going for it” and turn it into a modern and contemporary beach house with soul and character. “When you have a client in front of you, you’ve got to take their dreams for the property and put it down on paper,” Mr Richards says.

His team faced a considerable challenge when the clients asked for a basement to be built under the existing floor. Piles underneath the house had to be removed so that the ground underneath could be excavated. The house was literally up in the air as Mr Richards and his team worked underneath to create a new level.

The multi-level home now features four bedrooms, five bathrooms and two living rooms. The water and the golden sandy beach situated below the property inspired the styling at the entrance and living areas, creating a stunning home that’s well suited to its environment.

Judges praised the team’s efforts on a very complicated renovation project. “The degree of difficulty for the builder was extreme, with concave and convex walls perfectly and consistently executed throughout — from the foundation to the roof — delivering a result that’s magical,” judges said.

Mr Richards claims his company’s main point of difference is the ability to take a project from the design phase right through to completion. “A lot of other builders don’t get involved in the design process, but I like to be involved right from the drawing stage, through to handing over the keys.”