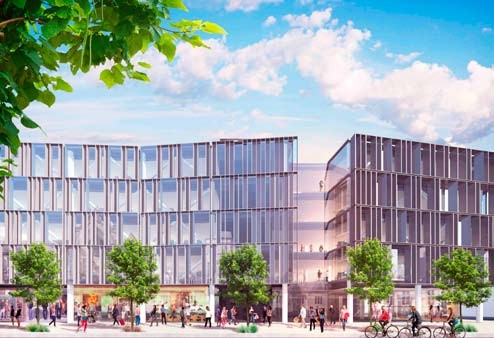 Arrow International (NZ) Ltd has secured the largest commercial project to come to market since the Christchurch rebuild began.

It will offer three separate blocks of premium retail and office space circumferenced by cycle parks, sheltered courtyards and 123 on-site car parks, making it a magnet for the retail, business and hospitality sectors.

Formerly home to Amuri Courts and URS House, the blue chip 4068sq m site sits in the heart of the much sought after western bank of the Avon River, and extends from Armagh through to Gloucester Streets, bound by Durham Street to the west, and neighbours the Convention Centre, Avon River Park and the Cultural and Performing Arts Precincts.
“Our client has a very clear vision for this project, and a huge amount of thought and passion has gone into seeding it from an idea into a reality,” according to Arrow International (NZ) Ltd chief executive Mark Hopwood.

“The design is inspirational and the construction technologies behind the build are leading edge. That applies to both seismic and environmental elements of the complex,” Mr Hopwood says.
The privately-owned Arrow International is one of the largest construction companies in New Zealand.
“Environmental and sustainability principles are very important to New Zealanders, so we see it as our responsibility to develop construction solutions that will sit comfortably with the generations of the future.

“The Awly complex has many green features and is designed to achieve a 5 star rating under the NZ Green Building Council scheme.”
The company has extensive experience in the construction of mixed-use commercial properties.
“Key to the Arrow proposal was recognising the unique demands of the Awly Building and the time frame within which the project is to be delivered,” Mr Hopwood says.

“To that end, we proposed an in-house mechanical and electrical manager as part of the build team to meet the requirements of pace and co-ordination.
“We also have strong links with local suppliers, and will be working closely with them for the likes of excavation, piling, waterproofing and concrete.”

Arrow is also the construction partner for Anthony Gough’s The Terrace project. Arrow International has invested heavily in its Christchurch operation over the past 18 months, with staff now numbering in excess of 230.