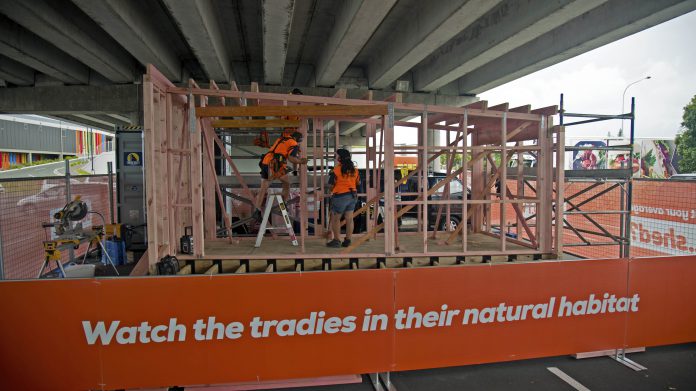 In a bid to raise awareness of the growing labour shortfall in the construction industry and to highlight career opportunities on offer to career seekers and their influencers, BCITO staged its largest-ever recruitment promotion in March and April.

The campaign included the build of “Not Your Average Shed” — a transportable, high-end entertainment pod/sleepout.

This was built onsite in Sylvia Park in Auckland, New Zealand’s largest shopping centre. A team of eight skilled apprentices across several trades which the BCITO covers, spent three weeks on the project.

Their skills, camaraderie, fun times, hard times, eureka! moments and challenges they faced were all broadcast online at BCITO.TV, and shared across all available social media channels.

As well as being the practical part of the campaign, Not Your Average Shed itself was built with a purpose in mind. One lucky bidder bought the unique structure for $29,100 which was then donated to Habitat for Humanity Auckland.

“We believe everybody deserves a decent and affordable place to live. It‘s excellent that the BCITO has focused clearly on the needs of the industry. We won’t be able to tackle the issue of affordability that many families are facing until we properly resource the industry to meet demand,” Mr LaPointe says.

“A vital part of the solution needs to be around training, to ensure we have more skilled builders in the industry. We also need the industry to be innovative and creative, to find new ways to build cost-efficient and healthy homes which will last. The Not Your Average Shed build was a fantastic project.”

BCITO marketing and communications manager Andrew Robertson says the BCITO wanted to take a real, weighty building project, add apprentices and stir so that throughout the campaign content just happened, same as it does on every building site across the country, every day.

“We couldn’t make this stuff up. This is a project that hasn’t been done before and it’s been an amazing way to connect with our audience,” Mr Robertson says.

The project not only highlighted what it’s like to be on a building site all day, but also showcased some of the innovation going on in the industry around product and methods of construction.

There was no better way to show the public what it’s like on the job than to put a live build being constructed by actual apprentices right smack-down in front of them, and say “check out the action — look, see, hear all about it, ask questions, get involved.

And for Habitat for Humanity, the donation of $29,100 has assisted their cause immensely.

Media coverage was strong throughout the campaign — online, in print, on screen and on radio.

In the coming few months the BCITO will be able to measure how much impact this campaign has had on the 186,000 millennials in New Zealand who are actively seeking out their future career options, not to mention the 400,000 or so people of influence in their lives.

For Adoptacar, the successful bidder — 18 sq m of well-built pure escape, or a trendy new office for the car yard  — you’ve scored a bargain!