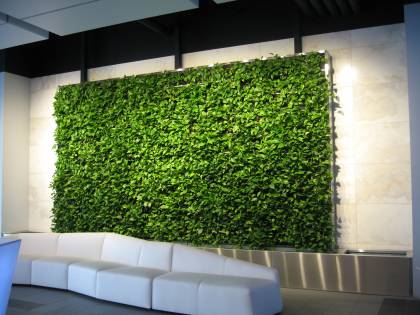 There is no doubt that the popularity of greenwalls has significantly grown over the past few years.

However, Mark Paul, horticulturist and Australian greenwall pioneer, warns about the hidden dangers of going fake versus living.

Mr Paul, founder of The Greenwall Company, says although the aesthetic of a fake greenwall can be appealing and the faux plant choice has expanded over the years, there are a number of things to consider.

“Aside from the lack of health benefits, they are a fire hazard due to the chemicals they are treated with and the dust they collect. The same dust can cause an increase in allergies, especially when placed in closed office spaces,” he says.

“After a number of media reported ‘greenwall fires’, all in fake greenwalls, many commercial property managers have banned them and had existing ones removed,” Mr Paul says.

The benefits of a living greenwall include:

• Improved air quality in urban environments: Living walls will actually filter out harmful pollutants and dust rather than attracting them.

• Aesthetically appealing: Greenwalls can be designed as a standout feature or blend into the natural environment.

• Lower power bills: Living greenwalls help to regulate the temperature of the building they are installed on.

• Sound insulation: Living greenwalls can absorb up to 10 decibels of sound, which is why they are a great option for office environments.

• Lower maintenance: Living greenwalls are fitted with an automated irrigation system, enabling them to essentially look after themselves.