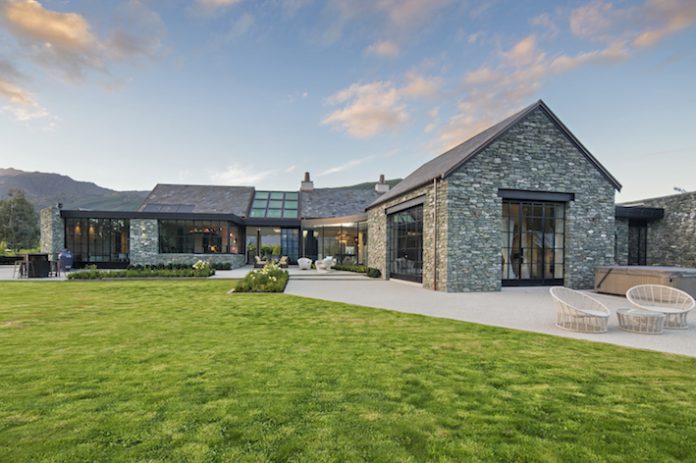 A J Saville Builder Ltd has demonstrated its construction know-how, winning a series of awards for its luxury Queenstown home.

The build was awarded the Southern Registered Master Builders 2018 Supreme House of the Year, a Gold Award and category win for the New Home over $2 million award.

It also took out two lifestyle awards, the Craftsmanship Award and the Heart of the Home Kitchen Award.

A J Saville Builder Ltd owner and director Allister Saville says it was great to build a home that was appreciated not just by the owners, but by others in the industry too.

“Everyone involved in the project was pretty stoked with the win. It was great to be able to bring our owners’ vision to life and then be recognised by the judges,” Mr Saville says.

The winning House of the Year won over the judges with its immaculate detailing and craftsmanship.

“The collection of different building types, functions, cladding and internal finishes are all clustered around a courtyard orientated to maximise views and sun,” they said.

“The buildings are connected by curved, double-glazed, full-wall units, which required special handling and precise positioning. Everything is immaculately detailed, requiring bespoke construction techniques mostly to follow the curves, in this four-year build.

“The contractor, A J Saville and the team, should be justly proud of achieving the highest levels of workmanship from the demanding project requirements.”

Mr Saville says throughout the construction he was always conscious of the owner’s specific vision. He had to balance a traditional Central Otago aesthetic while incorporating the flavour of specific locations that the owner had visited all over the world.

Being a four-year build, the project faced several challenges.

“The duration of the build meant we had to endure four winters and four summers, so the building process took a lot of planning on our part.

“We had to separate it into multiple stages that each had to be carefully linked together, so aspects like building the roof in parts proved to be quite a headache.”

Mr Saville says the win is another notch in the belt for the company, which has been entering and winning awards since 1999.

“This award demonstrates the consistency and quality of our builders, and their ability to build something ‘out of the box’.”

A J Saville Builder Ltd has been a Registered Master Builder since 1999, which Mr Saville says has been a huge advantage for the business over the years.

“There are some great benefits in being part of a widely recognised association, especially with the training and education that Master Builders can provide to its members.”

House of the Year is made possible through the support of PlaceMakers, Master Build 10-Year Guarantee, GIB, Nulook, CARTERS, Plumbing World, Resene and Bunnings Trade.