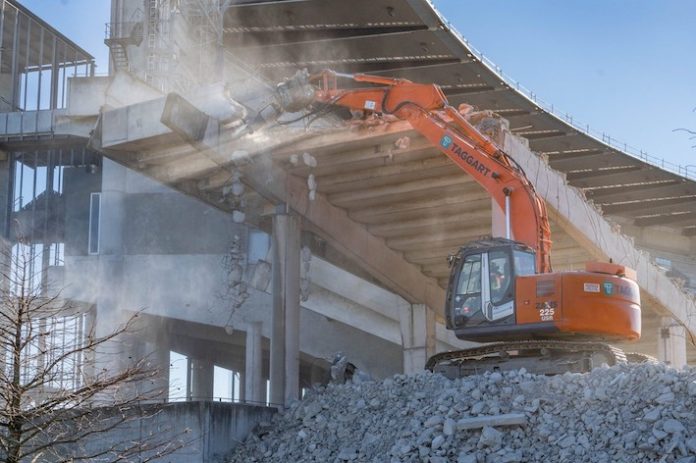 Pioneering demolition Christchurch company Taggart has proved you can salvage between 70% to almost 100% of construction and demolition (C&D) waste from landfill.

The company has salvaged more than 98% of the remains of Lancaster Park’s Tui Stand. The Taggart team crushed and reused concrete from the stand for civil construction projects, and gravel hardfill was reused under the Nga Puna Wai sports grounds.

Taggart applies the ecolabel to projects that meet strict environmental standards for reduction and measurement of waste.

“Because the ecolabel sets the toughest standards for C&D waste removal in New Zealand, it’s a high benchmark for us to set ourselves against,” Taggart says.

“In the year since we got the ecolabel, 14 of our projects have achieved its standards. That means we have diverted thousands of tonnes of waste from landfill by relocating, recycling, reusing or repurposing materials from demolitions.”

C&D waste accounts for almost half of all waste in New Zealand’s landfills, and is increasingly under scrutiny by the Government and councils.

After the Christchurch earthquake and the rebuild, the volume of material going to dump was “mind blowing”, Taggart says.

“I thought, there had to be a better way to clean up the city. That’s when we really started to think about how to reuse, recycle or repurpose materials.

“We’re all passionate about our work, and diverting waste from landfill has become part of our culture. We are now more about resource reuse and recovery than standard demolition.”

Taggart says the company sought the Environmental Choice New Zealand ecolabel to set the company apart from competitors, and provide verification of its waste-reduction processes.

“It shows we are different from those that knock buildings down and take things straight to the dump.

“Having the ecolabel helps us win tenders, especially in the public sector. After deconstructing the Tui Stand, we moved on to the concrete floors and foundations of Lancaster Park and recycled the concrete back in the park.

“Steel will be sold as scrap. That means we have achieved 100% recovery on this project. Having the ecolabel sets a standard, and inspires us all to think creatively about how we can divert, reuse or recycle waste.”

One of the largest obstacles facing New Zealand is the lack of measurement around construction and demolition waste. The Environmental Choice ecolabel has strict requirements for measuring and reporting.

Taggart says diverting 70% was the minimum to achieve the ecolabel requirement, but the team wanted to beat that where they could.

“Each project has its own waste minimisation plan, including how we will sort and separate materials on site. Concrete and brick are processed, crushed and recycled for use in civil construction projects such as car parks.”

Taggart says the real driver for the company is that the cost of dumping is very expensive, and it’s a big bonus if they can find smarter ways of dealing with materials that bring an environmental saving as well.

“We found being reuse-focused didn’t add more time, and because we won more work as a result, we were able to invest funds into new equipment.”

Taggart says each year, the company’s employees take on a sustainability challenge, and last year decided to see what else could be repurposed within the business rather than sent to landfill.

“We had 14 teams competing — each team could only use materials from their site.

“They were given eight hours to create an item that was auctioned on TradeMe, with the proceeds going to the team’s chosen charity. The winning inventions — a brazier, a poultry feeder and a dog bed — raised more than $1500 for charity.”

“Paul and his team are leading by example. New Zealand has one of the highest rates of landfill waste disposal in the developed world, but Taggart has shown that reducing waste is not only good for the country, but it’s good for business, too.”

To find out more about how Taggart Demolition achieved its ecolabel, visit the Environmental Choice New Zealand web site.