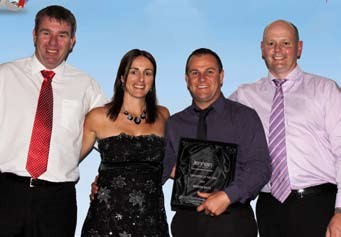 Jennian Homes’ nationwide network of franchise owners were joined by their suppliers at the company’s July anniversary conference in Fiji, celebrating 30 years of building homes.
More than 160 people attended the five-day conference, aptly themed “Back to the Future”. Jennian Homes’ national franchisor Richard Carver took the group on a journey back to the company’s 1982 beginnings, before setting sights firmly on the 30 years ahead, and Jennian’s “20/20 Vision” for the future.

The company celebrated the success of its franchisees and showed its appreciation for the continued support of its valued supply partners, some of whom have partnered Jennian for all of its 30 years in business, with an awards dinner held at the Radisson Blu Resort.

“Jennian’s ongoing relationship with quality, valued suppliers is an essential component in our success,” Mr Carver says.
“With the support of New Zealand’s top brands, we’ve built more than 10,000 homes in our 30 years.”
Jennian Homes Nelson Bays received the Franchise of the Year award for its continued commitment to excellence and performance. Jennian Homes Whakatane was named Most Improved Franchise for its efforts to improve performance, systems and processes.

“Jennian’s 30th birthday comes at a really exciting time for the building industry. We’ve hopefully seen out the downturn in construction, and the future is full of promise,” Mr Carver says.
“We’ve taken the time to celebrate our achievements, and now we want to focus on where Jennian is heading, 2020 and beyond.

“Our vision is to be New Zealand’s leading residential home builder, with a 10% market share by 2020. With 30 years of commitment to our clients, quality and excellence under our belts and the support of a fantastic network of suppliers and franchisees, I believe we can get there.”