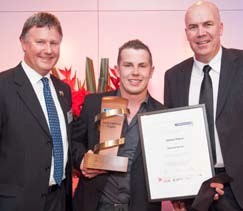 “I never expected to win, not at all. I told everyone I’d be happy if I came in the middle of the bunch at nationals, but it turned out to be an awesome outcome,” James says. Being involved in the Apprentice of the Year was a valuable experience for James, and one he believes other young apprentices should have a go at. “The competition gave me a lot of confidence, and people around me recognise it. I learned a lot, especially how to talk confidently about myself without sounding arrogant. You’ve got to learn what your good traits are, and also know what your shortfalls are, because that’s important too.”

James first got involved in Apprentice of the Year in 2011. His employer at Harbour Construction encouraged him to enter, and he ended up taking out third place at the regionals. But he was inspired to have another go and better himself in 2012. “I was really keen to enter again, because I wanted to win the regionals. I was really self-motivated,” he says.

And that motivation paid off. After an intensive 45-minute interview with four national judges, and a gruelling half-day practical test, James eventually went home from the national final in Wellington with a $5000 Carters Business Tools Grant towards furthering his career, an Irwin hand tool package worth $1000, an Apple iPad and the winning trophy. He also got a ticket to one of the building industry’s most esteemed events — the Registered Master Builders PlaceMakers 2012 House of the Year, an event which James is inspired to be a part of one day.

“House of the Year is always something I have wanted to take part in. I started off working in residential housing, and while I’m doing more commercial and high-end fit outs now, housing is where I came from and where I want to go back to,” he says. “I’m about to head overseas for a couple of years, but then I’ll come back and look into doing my own thing, maybe starting my own company. Or I might try and get more site managing experience and try to step into a management role. I don’t really want to get off the tools, but that’s where the money is, and it’s the best way forward.”

Whatever decision James makes, it is certain that he will succeed in his career.

The Apprentice of the Year competition is owned and managed by the RMBF, sponsored by Carters, in partnership with the BCITO, and supported by the Department of Building and Housing.